When the Pilgrims landed on the shores of Plymouth Bay in 1620, they were strangers to the new land but not to suffering. They had already been tested and tried in England, in Holland, and on the seas of the great Atlantic. Prior to their journeys, they set apart days of solemn humiliation, fasting, praying and seeking God.

So they lefte yt goodly & pleasante citie, which had been ther resting place near 12. years; but they knew they were pilgrimes, & looked not much on those things, but lift up their eyes to ye heavens, their dearest cuntrie, and quieted their spirits.[1] 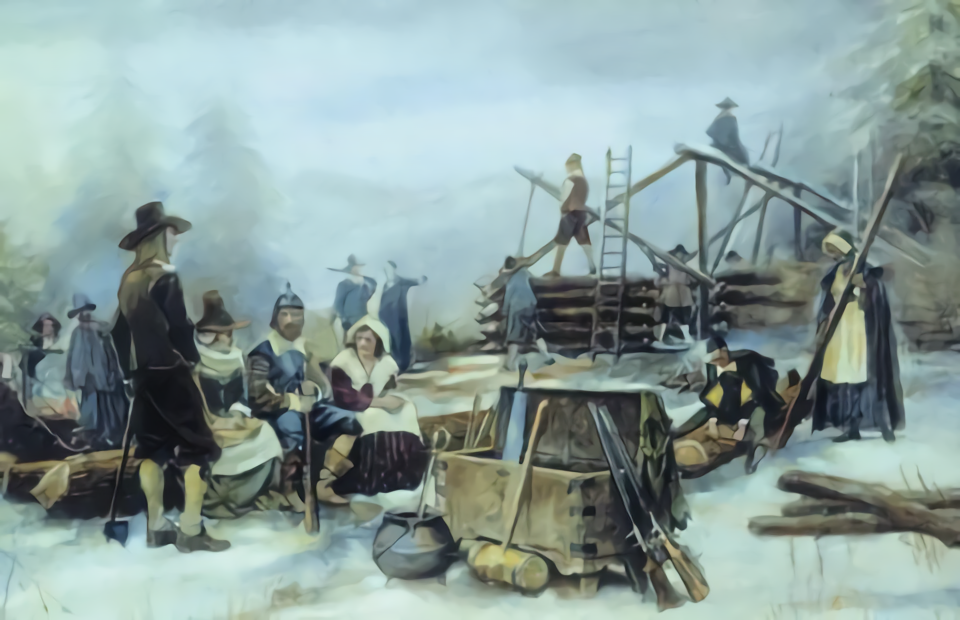 The winter of 1620 brought great adversity which extended beyond the trials of foul weather and disease.

In these hard & difficulte beginings they found some discontents & murmurings arise amongst some, and mutinous speeches & carriags in other; but they were soone quelled & overcome by ye wisdome, patience, and just & equall carrage of things by ye Govr and better part, wch clave faithfully togeather in ye maine. But that which was most sadd & lamentable was, that in 2. or 3. moneths time halfe of their company dyed, espetialy in Jan: & February, being ye depth of winter, and wanting houses & other comforts; being infected with ye scurvie & other diseases, which this long vioage & their inacomodate condition had brought upon them; so as ther dyed some times 2. or 3. of a day, in ye foresaid time; that of 100. & odd persons, scarce 50. remained.

And of these in ye time of most distres, ther was but 6. or 7. sound persons, who, to their great comendations be it spoken, spared no pains, night nor day, but with abundance of toyle and hazard of their owne health, fetched them woode, made them fires, drest them meat, made their beads, washed their lothsome cloaths, cloathed & uncloathed them; in a word, did all ye homly & necessarie offices for them wch dainty & quesie stomacks cannot endure to hear named; and all this willingly & cherfully, without any grudging in ye least, shewing herein their true love unto their friends & bretheren. A rare example & worthy to be remembred.

The winter passed, crops were planted, but drought persisted. The ground was parched like withered hay. The pilgrims responded by setting aside another solemn day of humiliation to seek the Lord humbly and fervently in prayer.

To their owne, & the Indeans admiration, that lived amongest them. For all ye morning, and greatest part of the day, it was clear weather & very hotte, and not a cloud or any signe of raine to be seen, yet toward evening it begane to overcast, and shortly after to raine, with shuch sweete and gentle showers, as gave them cause of rejoyceing, & blesing God. It came, without either wind, or thunder, or any violence, and by degreese in yt abundance, as that ye earth was thorowly wete and soked therwith.

They begane now to gather in ye small harvest they had, and to fitte up their houses and dwellings against winter, being all well recovered in health & strenght, and had all things in good plenty; for as some were thus imployed in affairs abroad, others were excersised in fishing, aboute codd, & bass, & other fish, of which yey tooke good store, of which every family had their portion. All ye somer ther was no want. And now begane to come in store of foule, as winter approached, of which this place did abound when they came first (but afterward decreased by degrees). And besids water foule, ther was great store of wild Turkies, of which they tooke many, besids venison, &c. Besids, they had about a peck a meale a weeke to a person, or now since harvest, Indean corn to yt proportion. Which made many afterwards write so largly of their plenty hear to their freinds in England, which were not fained, but true reports.

As their habit was, the community of fifty-three Mayflower Pilgrims and many Indians came together for a time of thanksgiving celebrating the time of plenty that had come and the goodness of God that was upon them. Thanksgiving was a response to God upon whom they depended in want and plenty, through death and life, in sorrow and gladness.

In a letter to a friend, Edward Winslow wrote: “And God be praised, we had a good increase…. Our harvest being gotten in, our governor sent four men on fowling that so we might after a special manner rejoice together….” Winslow continues, “These things I thought good to let you understand… that you might on our behalf give God thanks who hath dealt so favourably with us.”

After speaking with the South African leadership of Ambleside Schools early this morning, Mary Ann Shearers (Mark and Mary Ann Shearers Founders of the Daniel Academy ) shared with a grateful heart, one exclamation after another of all that God has given them through the hands of others after her home, warehouse, restaurant and store were all destroyed by wildfires, leaving her family with only the clothes they were wearing.

The years have brought many sorrows and griefs to each of us, some much greater than others. As there continue to be these times of plenty and want, let us draw near to our Father in heaven, the safe resting place for our souls.