During a recent visit to the National Gallery of Art, we had the privilege of learning from Dr. David Gariff, senior lecturer at the Gallery. We walked among and reflected upon a dozen Nativity masterpieces. 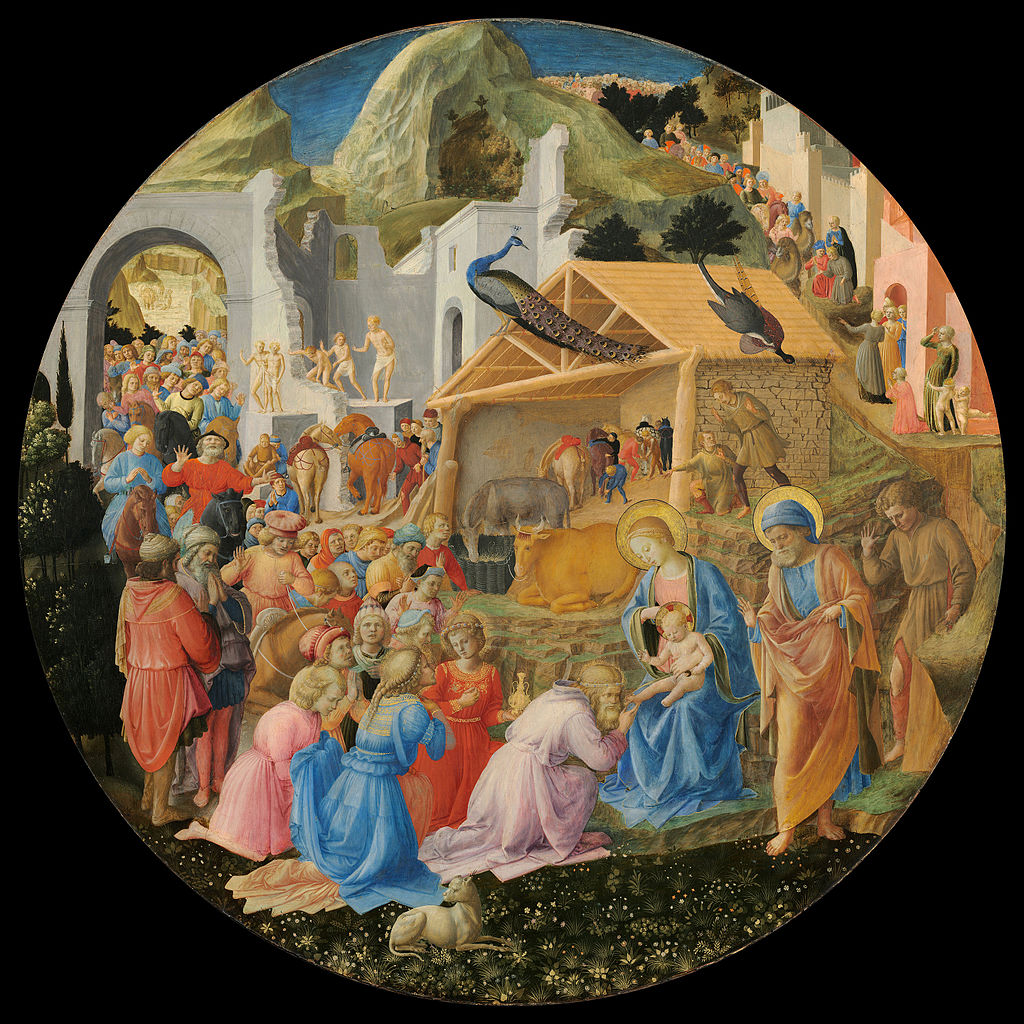 As far back as the Roman catacombs, artists have depicted the varied episodes of the Christmas story, from the annunciation to the flight into Egypt. Drawing from the Scriptures, as well as non-canonical writings, artists have sought not just to tell the story but to form hearts and minds. Typology, the use of representational types or symbols, was the accepted means of instruction in such sacred ideas. A lovely example of such instruction is Fra Angelico and Fra Filippo Lippi’s The Adoration of the Magi. This magnificent piece contains a myriad of themes in multiple episodes. The nativity is set amid architectural ruins, representing the crumbling of the classical world. Upon these ruins stand five thin and scantily clad men, impoverished onlookers, who fail to join the rejoicing multitude processing towards the picture’s focal point, Christ Jesus in the arms of his mother. The approaching worshipers all have hands clasped heavenward or palms outward in praise and amazement. Contemplative eyes are turned upward or directed towards the babe held in his mother’s lap. The throng is marked by fervent devotion, seemingly absent of consciousness of self or others; they have come to adore Him.

Although set in the very center of the painting, the ox and the ass are often overlooked. The ox looks earnestly upon the Christ-child and the adoring elder Wiseman who kneels before his King. The ass feeds fervently, looking out of the painting at the observer. He is unaware of the wonder that is occurring all around him. The artists are providing a pictorial representation of Isaiah 1:3:

An ox knows its owner, and a donkey its master's manger, But Israel does not know, My people do not understand.

Clearly, these two animals have two very different ways of relating to their master, one of devotion, the other self-satisfaction. The ox is most aware of his master. The donkey is most aware of his stomach. The eighteenth century, bishop and poet, Robert Lowth, recognized in this text, Yahweh’s protest that "My people doth not consider me, doth not reflect on my relation to them as Lord and Master."

And us?  As we ponder this masterpiece, are we like the impoverished observing from the ruins or the processing worshippers? Are we like the ox attentive to His master or the ass focused merely on feeding? Is our attention upon the Master and the Master’s ways or are we like Isaiah’s audience, not knowing and not considering?

What ideas of Christmas have we sowed to our children, to our grandchildren, to one another through our adoration?